It’s easy to take skin care for granted when someone doesn’t have sensitive skin. You may like a certain skin care brand but some of the products may give you a negative reaction whereas others do not. It’s frustrating, time-consuming, and expensive to try different products to see which ones won’t trigger a reaction.

Why is my skin so sensitive? Why does it get sensitive to certain products and not others? Do I have rosacea? What can I do to prevent and treat this?

If these are questions that you’ve been seeking the answers to and more, continue reading below!

60-70% of women and 50-60% of men self-reported having sensitive skin. The higher incidences for women might be because women tend to have thinner skin than men, and are more exposed to products (such as makeup) which increases the chance of exposure to triggering ingredients.

Just like other skin conditions such as acne and hyperpigmentation, anyone can develop sensitive skin. In the next section, we’ll explore what causes skin to be sensitive in the first place.

What causes my skin to be sensitive?

Sensitive skin can be caused by multiple factors such as someone being naturally prone to triggers; external factors like the weather or ingredients from products; and underlying skin issues. 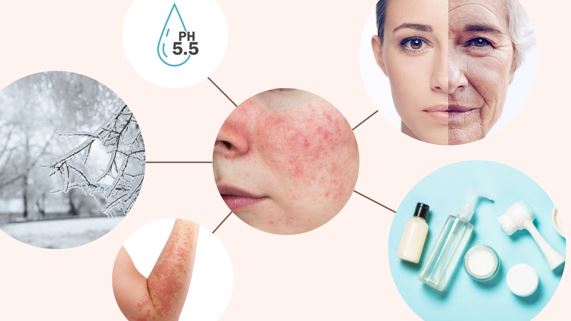 Age, gender, and the specific area on your face/body may influence your skin’s sensitivity. You may be more prone to sensitive skin as you age since skin gets thinner and drier with time, which means that your skin barrier function is more compromised. This causes more irritants to penetrate your skin and cause symptoms of sensitive skin. Thin skin is also more prone to flushing due to increased barrier damage and vascular reactivity. In addition, men tend to have thicker skin than women meaning that their skin barrier is less susceptible to damage. Moreover, the face is usually more sensitive as facial skin is relatively thinner than other parts of the body, there is a greater use of cosmetics in this area, and more nerve endings are present on the face.

In addition to natural causes, external causes can induce sensitive skin. Indoor air such as air conditioning or heater as well as climatic factors like hot/cold weather, drier climates, wind, etc. can increase water loss thus increasing skin sensitivity. And that’s not all – pollutants can penetrate your skin barrier and unprotected sun exposure cause photosensitivity. Just as a reminder, do not use chemical sunscreens especially if you have sensitive skin since the ingredients get absorbed into your skin and cause unnecessary irritation (read more about chemical sunscreens here).

Specific ingredients may also trigger a negative reaction. For example, glycolic acid is one of the gold standard ingredients for chemical peels (you may read more about chemical peels here. However, glycolic acid’s molecule size is small and penetrates fast and deep into the skin which may cause irritation in some individuals. In this case, lactic acid is a great alternative since the molecule is bigger so it penetrates slower and triggers less of a reaction. It should be noted however, that while your skin may seem sensitive at first, you can build tolerance to ingredients i.e. you may have a reaction for the first few uses but this will get better with increased use. Other key skin care ingredients that may cause initial reactions include: benzoyl peroxide, retinol, and vitamin C (L-ascorbic acid).

Lastly, you may have an underlying skin condition such as dermatitis, psoriasis, or eczema where the skin’s barrier function is already sensitive or already has inflammation which amplifies these skin reactions. People often mistake rosacea as sensitive skin but these conditions are not the same condition. So how do you tell if you have rosacea, sensitive skin, or both?

Is Rosacea and Sensitive Skin the same?

Sensitive skin and rosacea may be related but they are not the same condition. In many cases, sensitive skin can be solved by avoiding triggers whereas rosacea is more complicated.

Rosacea is a chronic inflammatory skin disease that affects 5.46% of global adult populations. Though many studies have been conducted, its cause is not clear. However, it is largely influenced by genetics as you are more susceptible to having this condition if you have family members with Rosacea. Rosacea can affect anyone but mostly occurs in white middle-aged women with fair skin.

Rosacea often goes undiagnosed because it usually shows up during adulthood and overlaps with other skin conditions. For example, rosacea and acne seem similar because both involve papules and pustules (pimples); dermatitis usually go hand-in-hand with rosacea; and flushing i.e. red skin is commonly seen in all sorts of skin diseases. However, two very diagnostic features of Rosacea are phymatous signs (such as enlarged pores and nodular irregularities) and persistent erythema. All other signs are secondary features that may or may not be present.

Rosacea can occur by a variety of factors that are similar triggers for sensitive skin such as: heat/cold, UV radiation, eating certain foods/drinks, using improper skin care ingredients etc. It is best to avoid aggravating rosacea and treat it as you would any type of skin irritation.

So how do you treat sensitive skin?

The symptoms for sensitive skin may be frequent as many of the treatments cannot necessarily treat the root of the issue but helps reduce the symptoms. The best way to combat sensitive skin (and rosacea) is to avoid triggers, control symptoms, and do laser treatments. 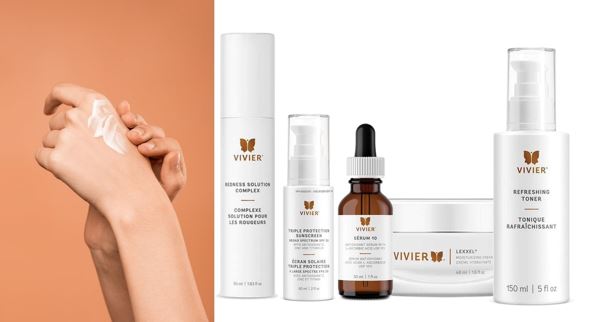 Lastly, for symptoms that are persistent or permanent, Intense Pulsed Light (IPL) treatment is an option. Sometimes, the redness you see on your skin is from broken capillaries and can only be corrected by IPL treatments. Broken capillaries can be caused by multiple factors such as scratching your skin; when you try and pop your acne; straining your face; unprotected sun exposure and more.

IPL treatments also thicken your skin so that it is less susceptible to damage and visibility of redness is reduced.