Acne (clinically known as acne vulgaris) is the most common skin condition that affects 5.6 million Canadians with more than 80% of the cases occurring between the ages of 12 and 24. Acne occurs when pores become clogged with dead skin cells and oil from the skin.

Acne occurs not only on the face but can occur on the body – most notably the back, chest, and shoulders. Acne comes and goes when we are teenagers due to hormonal changes. However, some people suffer from persistent acne and acne scars which can lead to anxiety, lowered self-esteem, and depression.

There is no one-size-fits-all solution for fighting acne which often leads to worsened symptoms, confusion, and frustration. Despite being one of the most common skin conditions in the world, relatively little is known about its cause. However, promising research over the years has provided us good knowledge on how to approach and treat acne. Continue reading to learn more! 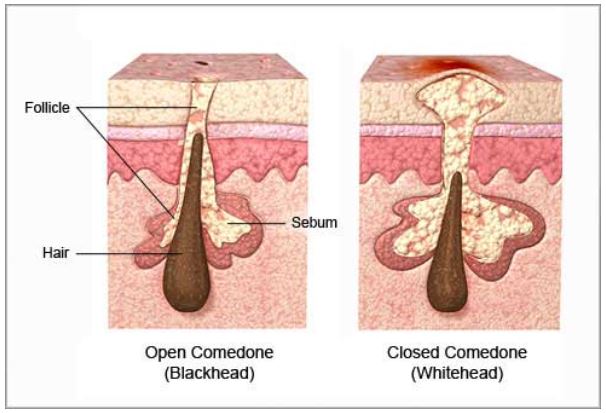 Acne is an inflammatory disorder of the psilosebaceous unit which is made up of sebaceous glands, hair follicle, and hair.

Naturally occurring hormones called androgens signal sebaceous glands to produce oil called sebum that coats the skin and hair in protective oil to keep them moisturized and healthy. When there is too little sebum production, dryness and irritation on the skin may result. When there is too much sebum production, an overly oily appearance on the skin may occur which increases the risk of acne. Acne forms when the affected hair follicles become clogged with sebum and dead skin cells from the skin.

Swelling and infection occurs when bacteria called Propionibacterium acnes (P. acnes) induce an inflammatory response from the body resulting in acne.  There are many types of acne and in the next section we’ll explore the different types of acne and severity of each type. 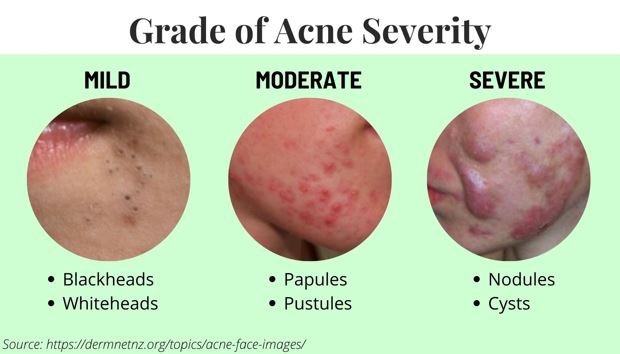 Acne is a broad term that includes blackheads, whiteheads, papules, pustules, nodules, cysts etc. While the definitions on the severity grades of acne vary, most acne can be categorised into three main categories of: mild, moderate, and severe.

Blackheads and whiteheads are both mild forms of acne. Blackheads (also known as open comedones) form when pores become clogged and remain open. The debris in the open pore reacts with the air and becomes oxidized.  This causes the appearance of black dots on the pore surface. Whiteheads (also known as closed comedones) are clogged pores that are closed or have a narrow opening so it does not oxidize with the air, causing the acne to appear white.

Moderate forms of acne involve papules and pustules. Papules are advanced forms of whiteheads that are red or pink bumps with a swollen appearance. When bacteria become trapped in the pores along with oil and dead skin cells, this causes white blood cells to enter the hair follicle, creating inflammation. Pustules are very similar to papules except that they are filled with pus (white blood cells, dead skin cells, and bacteria) and are painful to the touch. Pustules look like white/yellowish bumps surrounded by a red ring.

Lastly, severe forms of acne are in the form of nodules and cysts. Nodules occur when an infection occurs deep within the skin which causes the pore to become red and swollen. Nodules feel like hard knots under the skin and can last a long time – even months. Cysts are similar to nodules but are filled with pus and look similar to boils. The deep infection in both nodules and cysts makes them hard to clear with over-the-counter (OTC) products, often requiring consultation with a dermatologist.

There are many types of acne but how do they occur in the first place? Next, we discuss some commonly known causes of acne.

As previously mentioned, over-production of sebum can cause acne. However, there are other factors that contribute to the formation of acne. Some factors are not in our control but some can be prevented or controlled through lifestyle changes. 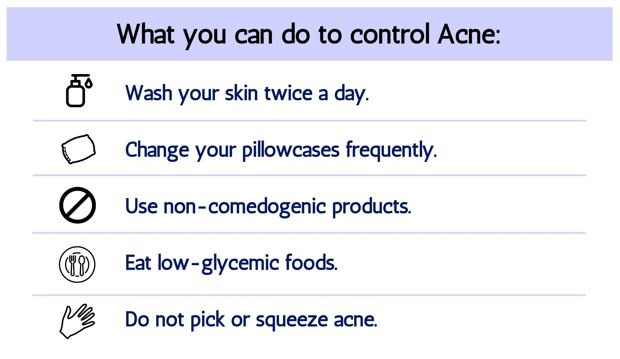 If you’ve tried these methods and your acne still doesn’t seem to be going away your acne requires more advanced treatment.  It is likely now time to seek professional help.

In most mild to moderate acne cases, topical treatment is a great start or sufficient for preventing and treating acne. There are many ingredients that are effective against acne but three ingredients are well-known and studied: Salicylic Acid, Benzoyl Peroxide, and Retinoid/Retinol. Each of these products has different purposes in treating acne so all three of these may be used in your treatment plan.

All three topical products may be used together but it’s best to consult a professional to create a safe skin care routine for you. Mixing these topical treatments in the wrong order or within the wrong skin care routine can cause irritation or worsen symptoms. Overusing the products can also cause irritation but is easily resolved with proper lotion and creams in most cases.

For severe cases such as nodules and cysts, it is best-advised to visit a dermatologist. A dermatologist may prescribe stronger doses for topical applications or provide oral medications. Some cases might require a mix of treatment options used together to treat the concern. In other cases, invasive procedures such as making an incision on the skin and draining pus might be required.

Do not pop or prick your nodules and cysts as doing so will aggravate the acne and make symptoms worse. The healing process will take longer and highly increases the risk of acne scars. A professional can unclog your acne in a safer and less risky way.

Be patient with your skin care professional as approaching acne (regardless if it is mild or severe) is a complicated and long process. You’ll seldom see quick results as most topical treatments require at least 6-8 weeks before improvement is seen.

While mild acne is relatively simple to treat in most cases, acne scars are another equally or bigger concern. Acne scars are reddish or brownish marks that remain after the active acne disappears. These scars last months or even years without proper treatment.

Once your acne is under control, it is advised to change your skin care routine to an acne/hyperpigmentation routine so that you can treat any resulting PIH (post-inflammatory hyperpigmentation) and scars resulting from your acne.

In many cases, a chemical peel treatment can help improve the appearance of acne scars. For advance cases, laser treatment or microneedling are good options to consider.

Remember to consult a professional so that you don’t make the hyperpigmentation worse!

Acne is a complicated skin disorder with a variety of treatment options available. It is advised to consult your skin care provider on the best treatment option for you. Remember to do your part in keeping up with good skin care habits and remember that treating acne and acne scars take time and commitment.

If you would like to book an acne treatment consultation to discuss in-clinic acne treatments or at-home acne products to use please click the link below.  We offer video, phone, or in-person appointments for your convenience.
https://essentiallife.ca/free-skin-evaluation.html

To learn more about at-home acne treatment products our clients have had success with please click the link below.
https://essentiallifestore.com/shop/skin-correction/acne/